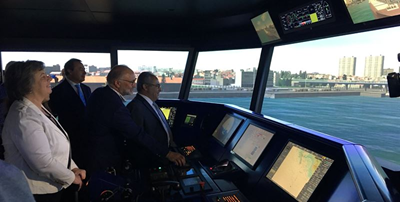 Wärtsilä has supplied simulators aimed to provide realistic hands-on training at a new facility in Portugal.

The training center is developed and run by the Port Authority for the ports of Douro, Leixōes and Vano do Castelo (APDL), and was inaugurated in the end of July at a ceremony headed by Portugal’s Minister of the Sea, Ana Paula Vitorino. The order was placed in October 2018.

The center is the country’s largest and most advanced maritime training facility. It features a Wärtsilä Full Mission Bridge (FMB) simulator with 360 degree projection, two tug simulators with 360 degree LCD, and one VTS simulator to allow full training, complex exercises, and certification for pilots, tug masters, merchant navy offices, and seafaring vessel crews. The simulation technology has been developed by Transas, a Wärtsilä company.

The Wärtsilä scope includes the development of several 3D zones and a tug boat model. Wärtsilä has earlier provided APDL with a VTS system.