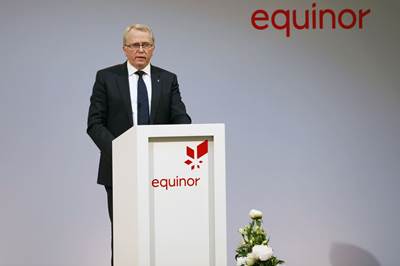 Equinor has short-listed four internal candidates to succeed Chief Executive Eldar Saetre who is likely to announce his departure within the next few months, a source familiar with the process told Reuters.

The candidates have been asked to present their views on how to speed up the Norwegian oil and gas group's transformation towards becoming a greener company while preserving profitability, the source said.

"We do not want to comment on speculations or rumors about when Eldar Saetre will step down as CEO or about possible candidates to take over as CEO," Equinor's spokesman said.

Saetre, 64, has led Equinor since 2014 when his predecessor Helge Lund left to take the top job at BG Group, now part of Royal Dutch Shell.

Saetre reached the retirement age of 62 in 2018, but the company's board asked him to stay for up to five years.

Saetre changed the majority state-owned company's name from Statoil to Equinor in 2018 and launched its transformation from an oil and gas firm into a "broad energy" company, promising to increase investments in renewables.

Saetre also had to deal with a wave of writedowns related to acquisitions of onshore and offshore petroleum reserves in the United States in the years before the 2014 oil price crash, eventually leading to accumulated losses and write-offs of $20.4 billion dollars.

Of the four candidates, Bacher previously ran the company's international division, which did not include Equinor's operations in the United States.

Rummelhoff, the only female candidate, has run Equinor's renewable business and is currently responsible for trading, which had a strong performance in the second quarter, helping to counter the impact of a slump in oil and gas prices.

Reitan was CFO until 2015, when he became head of the U.S. division.

The fourth candidate, Opedal, has spent more than 20 years at Equinor mostly in technical jobs and was in charge of Brazil, where Equinor aims to grow rapidly in the next 5 years.