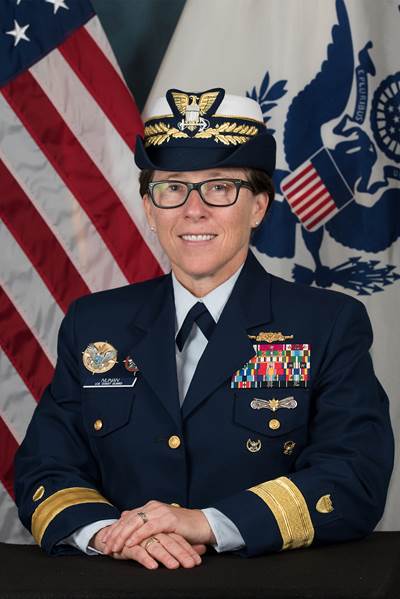 The U.S. Department of Transportation and the Maritime Administration announced the appointment of Rear Admiral Joanna M. Nunan (U.S. Coast Guard, Ret.) as the next superintendent of the U.S. Merchant Marine Academy (USMMA). Nunan, who spent more than three decades in the U.S. Coast Guard, has commanded units at every level both afloat and ashore. She will begin work at the Academy in a few weeks.

Rear Admiral Nunan retired earlier this year as the Coast Guard’s Deputy for Personnel Readiness. In that role, she oversaw the Coast Guard’s entire personnel enterprise, including the recruitment, training, support, and retention of all active duty, reserve, and civilian personnel. She also supervised the Coast Guard Academy and served on its Board of Trustees.

Previously, Rear Admiral Nunan served as the Assistant Commandant for Human Resources. In that role, among her many responsibilities, she helped spearhead efforts to expand diversity and inclusion in the Coast Guard, including formulating policy changes focused on increasing the retention of women in the service. She also served as a member of the Coast Guard’s Sexual Assault Prevention, Response, and Recovery Committee.

A Bridgeport, Connecticut native, Nunan graduated from the Coast Guard Academy in 1987 and received her Master of Business Administration from Rensselaer Polytechnic. She also obtained three Coast Guard merchant mariner licenses, including Master of vessels of not more than 1,600 gross tons and 3rd Mate on vessels of unlimited tonnage.