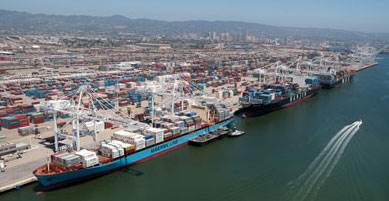 An added 400 dockworkers to handle Port of Oakland cargo; first new hires arrive this week to help clear vessel buildup
The first of 400 new dockworkers arrive this week to meet the Port of Oakland’s need for more labor, the port announced today, noting that additional hires will be phased into the workforce through September to handle a buildup of ships and cargo.
The port said its aim in brining in the new workers is to accelerate cargo operations and clear out a backlog of vessels anchored in San Francisco Bay.
“We’re not operating with the speed and efficiency our customers deserve right now,” said Maritime Director John Driscoll. “Additional longshore labor is an important first step in getting back on track.”
Waterfront employers and the longshore union agreed last month to beef up Oakland’s labor pool, the port said. And in addition to adding new workers, they agreed to train and promote 100 current workers, expanding the workforce available to fill positions requiring greater skill and experience.
According to the port, the extra help is necessary because containerized cargo volume in Oakland has increased from the previous year’s total for three straight months, while the number of vessels arriving in Oakland has grown, too, with the port often berthing 10 ships a day. Some ships are even anchored in the bay two days waiting for short-staffed terminals to clear vessels from berths. In addition, more auto carrier vessels and cruise ships are calling at Bay Area ports putting further strain on the longshore labor pool.
The labor shortage has lengthened the time ships spend loading and unloading by as much as a day. It has also added time to the delivery of cargo at final destination. The port said cargo and vessel delays should ease by the end of July. It added that it’s in discussions with waterfront labor and management on further measures to accelerate cargo operations.
Longshore labor is not hired by the Port of Oakland, but instead managed by marine terminal operators who lease their facilities from the port.
John Driscoll • Maritime • Port of Oakland
Email

Fitzgerald to Rejoin Crowley as COO

Crowley Maritime Corp. announced today that Ray Fitzgerald, who began his career with Crowley and most recently served as…