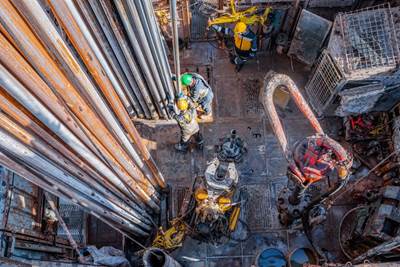 Oilfield services sector is set to reach the lowest total workforce count in over 10 years, as a consequence of the COVID-19 pandemic, low oil prices, and cuts in spending by the oil companies.

"The oil market turmoil brought on by Covid-19 has led to lower-than-anticipated activity and delayed projects, forcing the industry to deploy cost-cutting measures. Rystad Energy analysis of the top 50 oilfield service (OFS) firms shows that staffing is set to reach its lowest level in more than 10 years, with the anticipated revenue per employee also declining towards the previous downturn’s level," Norwegian energy intelligence group Rystad Energy said Tuesday.

Rystad Energy tracked the permanent employee count of the top service companies, including reported permanent employees at year-end, and found that the reduced staff levels in the OFS industry seen in 2016, after the previous downturn, have mostly been maintained since then at just over 760,000 employees, keeping a major cost driver – investment in human capital – at steady low levels.

"However, the downsizing expected this year is likely to result in the OFS industry experiencing the lowest total headcount in over a decade, which we estimate will amount to about 610,000 employees," Rystad said. 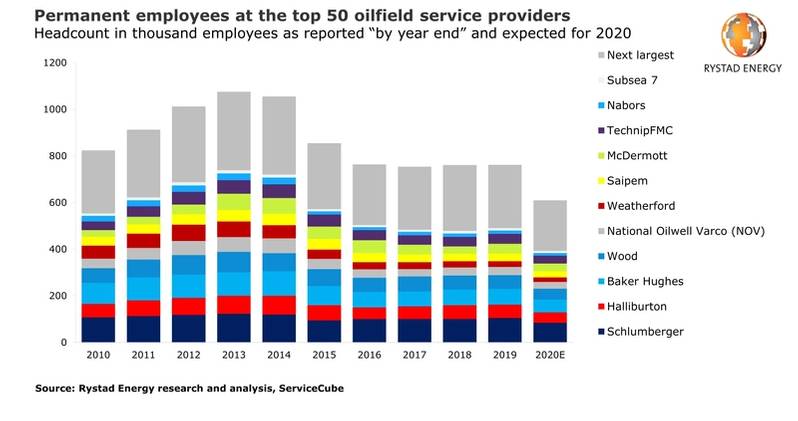 Rystad Energy calculates revenue per employee as a company's total yearly revenue divided by the number of employees by year-end.

"Studying this parameter provides an understanding of how efficiently service companies are able to utilize their employees. We consider this metric on a weighted average basis for the top service companies, which earned a total of over $200 billion in 2019," Rystad said.

Rystad said Tuesday that revenue per employee was not likely to fall as hard as in the previous crisis as companies have reacted early with layoffs and furloughs, and this time around there are fewer redundancies in terms of human capital investment.

Schlumberger, for example, recently announced that it will lay off 21,000 employees – equal to 20% of its workforce – and is expected to have a 25% year-on-year revenue decrease in 2020. This will bring its revenue per employee to $290,000, more than a 7% decline compared to last year, Rystad added.

OFS companies involved in shale operations began actively reducing their workforce as early as 2019. Revenues will continue to fall at an even quicker pace this year. Meanwhile, the long lead times of offshore projects mean that employment trends in the offshore sector are typically less volatile, Rystad said.

Further, several offshore companies have already begun the process of diversifying their offerings, shifting focus especially towards renewables. This kind of involvement in other industries could provide a cushion for low oil prices.

As a result, the offshore sector is expected to have a slight decrease in revenue per employee, Rystad said.

"Within our analysis, we see that companies in the North American onshore sector will struggle more with the transition into new markets as their work is primarily focused on drilling and well service, which does not transfer as well to other industries beyond oil and gas," Rystad added.

“OFS employment is now heading for the lowest numbers in the past decade as the Covid-19 pandemic continues to impact ongoing work and the frequency of new awards, both of which could take years to fully recover. Nevertheless, some companies saw a bountiful 2019 in terms of inbound orders, and 1H20 numbers show that these companies have been more resilient,“ says Rystad Energy’s Energy Service Analyst Lein Mann Hansen.

Time will tell whether massive backlogs will be enough to bolster revenues. New contract awards are poised to pick up towards the end of 2021 and 2022, but until then, OFS companies must continue cutting costs, fighting for the few awards available, and diversifying into new markets, Rystad added. 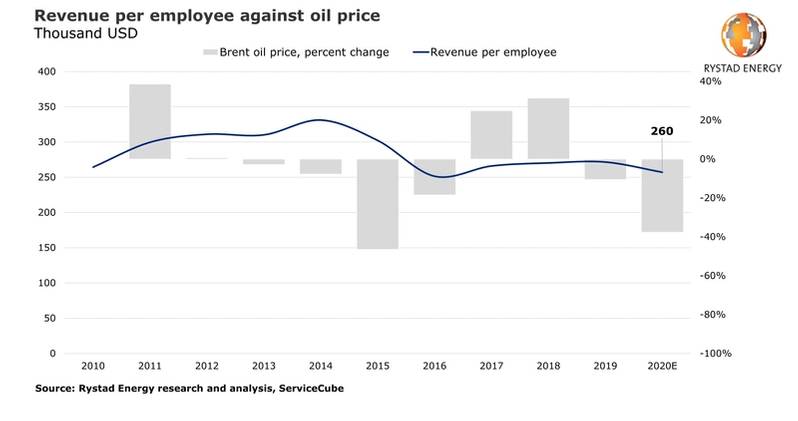