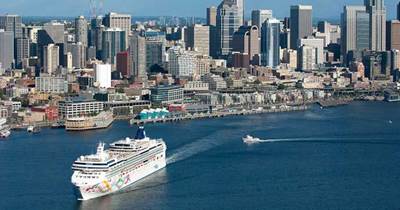 Cruise contract is port’s largest ever, cruise line homeports at Seattle's Pier 66 for 15 years
The Port of Seattle signed a 15-year lease with Norwegian Cruise Line Holdings (NCLH) parent company of Norwegian Cruise Line, Oceania Cruises and Regent Seven Seas Cruises. The deal secures NCLH ships in Seattle for the full term of the lease and provides passenger volume guarantees estimated to bring $73 million dollars of revenue to the port.
“We thank Norwegian Cruise Line for their commitment to Seattle and the Alaska cruise business,” said Commissioner John Creighton. “Cruise in Seattle means $440 million in annual economic impact for this region. This deal means more growth, which means more jobs.”
“Alaska is a favorite cruise destination for guests on all three of our brands and Seattle, with its incredible culinary offerings, luxurious accommodations and outstanding attractions, makes for an ideal homeport,” shared Frank Del Rio, chief executive officer for Norwegian Cruise Line Holdings Ltd. “With primary use of the world-class facilities at Pier 66, we can further customize our guests’ pre- and post-cruise experience and better align it with the superior service levels offered by our three award-winning brands.”
“This is a historic deal for the Port of Seattle,” said Port of Seattle CEO Ted Fick. “A 15-year lease for a cruise terminal is unprecedented on the West Coast. Norwegian Cruise Line is showing real vision by investing in the economic growth of this region.”
In addition NCLH will make tenant improvements to the Bell Street Cruise Terminal estimated at $30 million which will expand the portion of the P66 facilities used for processing cruise passengers. Under the new lease NCLH will manage the cruise operations at P66 and will have priority rights to the cruise vessel berth during the cruise season. The port will operate the facilities outside the cruise season. The capital investment to complete the terminal improvements will be shared between the port and NCLH. The 15-year business commitment is estimated to generate over $2 billion in total business revenue for the region, nearly 900 jobs and over $65 million in state and local taxes.
The agreement also includes language that will establish a Project Labor Agreement (PLA) between the tenant’s general contractor and the building trades.
"We commend the Port of Seattle for their expansion of Project Labor Agreements," said Monty Anderson of the Seattle Building Trades. “This not only insures quality construction, this expansion opens the door for local residents to join apprenticeship programs that lead into great paying construction careers.”
Seattle’s cruise business—which according to the port is currently leading all cruise homeports on the U.S. west coast in passenger volume—is responsible for more than 3,600 jobs, $441 million in annual business revenue and $17.2 million annually in state and local tax revenues. Each homeport vessel call generates $2.5 million for the local economy.
Norwegian Cruise Line Holdings Ltd. • Oceania • Port of Seattle
Email

Finland-based marine engine and technology provider Wärtsilä has appointed Håkan Agnevall as its next president and CEO.Agnevall…