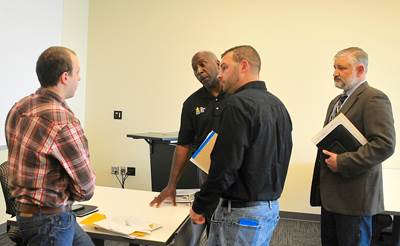 "It's really cool that companies come here and interview us in our classrooms," said Richard Zienty, who interned last summer with Buffalo Marine and rode from Houston to Lake Charles and everywhere in between. "I'm interviewing for my second internship this summer but I'm also looking to get hired with a company.”

Texas ranks third in the nation, with Houston ranking second, for all domestic maritime industry jobs, according to a PricewaterhouseCoopers Study released by the American Maritime Partnership. Having a maritime training program just around the corner allows local maritime companies access to a pool of candidates ready for work in the maritime industry. Companies like Higman Marine, Buffalo Marine, and Cheryl K Marine have hired San Jacinto College interns and employees for the past three summers.

"We've had great experience with the interns from San Jacinto College," said Mark Murphy with Cheryl K Marine. "For us and the industry as a whole, it's a great thing to have the school here. The interns come to us with the basic knowledge needed to help them get started in the industry. It also makes on-the-job training a lot easier."

Murphy and his colleagues added that mariners with associate degrees also tend to do well on the business side with crunching numbers, understanding process improvement, and communicating with managers.

For maritime student Zachery Leleux, interviewing for a chance to work in the industry is one step closer to his dream of becoming a professional mariner.

"I've always wanted this as my career," said Leleux, who previously interned with Higman Marine for 20 days on four different vessels. "I grew up wakeboarding along this ship channel, and now, I'm here training and watching day-to-day operations."

The College's new maritime campus opened in January 2016. The facility is located at 3700 Old Highway 146 in La Porte, Texas, across from the Bayport Terminal along the Port of Houston.

The College has offered maritime training since 2010 in the form of noncredit courses for working mariners to upgrade their certifications and licensing for U.S. Coast Guard requirements. In 2012, the College introduced the state’s first, and only, associate degree for maritime transportation to address the industry needs for more mariners with a college education.

The College also offers a program for those who wish to work in other areas of maritime by introducing an associate degree for cargo handling/logistics, transferable to the Texas Southern University maritime logistics program and the University of Houston College of Technology logistics program. An Introduction to Ships and Shipping courses accompanies the College’s business administration associate degree, which is transferable to Texas A&M University in Galveston through an articulation agreement.