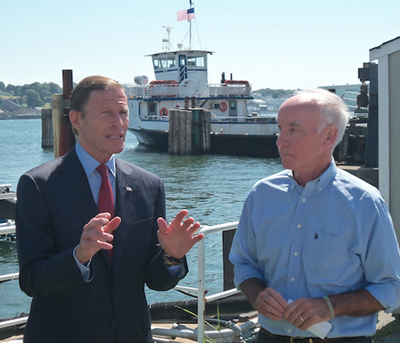 The American Maritime Partnership (AMP) joined with the Shipbuilders Council of America (SCA) to highlight new data that shows Connecticut ranks fourth among all states in private sector jobs related to the shipbuilding and repair industry. Supported by the Jones Act, which ensures vessels operating in our domestic waterways are U.S.-built, U.S.-crewed and U.S.-owned, Connecticut is home to 22,710 shipyard jobs, according to a recent study by the U.S. Maritime Administration covering both commercial and military ship construction.

“From major employers like Electric Boat to small private repair facilities, the shipbuilding industry is a powerhouse of the Connecticut economy, employing tens of thousands of people and generating billions in economic growth for our state,” said Sen. Richard Blumenthal (D-Conn.). “The expertise and skill of Connecticut’s shipbuilding and ship repair workforce is world renowned and second to none. I will work diligently to expand and strengthen this vital industry.”

“For eastern Connecticut, shipbuilding is a pillar of our economy and our history. In addition to the thousands of shipyard jobs along the shoreline, there are hundreds of Connecticut companies that form a supply chain for parts, machines and services that are critical to shipbuilding—more than 360 in the submarine supply chain alone,” Rep. Joe Courtney (D-Conn.) said. “The Jones Act strengthens our domestic shipbuilding industry and helps ensure that American ships are made by American workers like the people of eastern Connecticut.”

The U.S. shipyard industrial base in Connecticut and across the nation is vital to America’s national and   economic security. Private U.S. shipyards build, repair, maintain and modernize the largest and most sophisticated Navy and Coast Guard vessels in the world and do the same for the nation’s 40,000 commercial vessels. Across the country, the domestic maritime industry, supported by the Jones Act, sustains more than 478,000 jobs and has an annual economic impact of $92.5 billion according to a study conducted by PricewaterhouseCoopers (PwC) for the Transportation Institute. The industry also accounts for approximately $29 billion in annual wages and $10 billion in tax revenue each year.

“Connecticut’s shipbuilding industry continues the state’s proud maritime tradition,” said Shipbuilders Council of America president Matt Paxton.  “The state’s shipbuilding and repair industry packs an oversized economic punch, while also boosting America’s national security. Each of Connecticut’s shipbuilding jobs supports nearly three other jobs. This robust shipyard workforce and industrial base, as well as the national security and economic benefits that this industry provides, are enhanced by the Jones Act, which is strongly supported by the President, the Navy and every Congress and Administration in modern history.”