ICS Chairman: Use Training to Direct the Future of Shipping 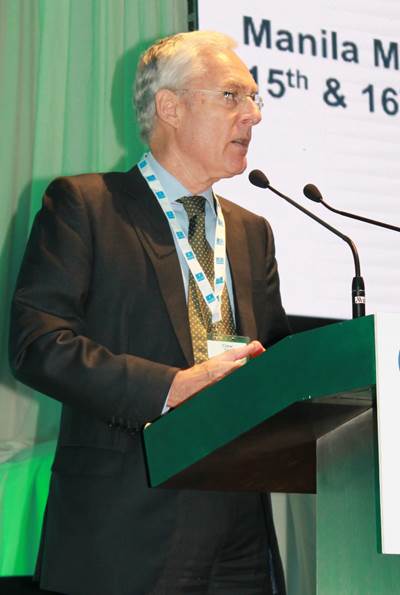 Training acts not only as a career enhancer, but also plays an essential role in the modernization of the shipping industry as a whole, said Esben Poulsson, Chairman of the International Chamber of Shipping (ICS), as he delivered the keynote speech at this year’s Crew Connect Global Conference in Manila.

“The future sustainability of the industry requires an evolutionary response to the training and retention of seafarers,“  he stressed. “We need to do more than simply respond to changing needs, we must learn to anticipate them and thereby control the development of the industry. “
In an uncertain time for the global economy and world trade, and therefore the shipping industry, he pointed out the inevitability that structural change will follow and that operations and trading patterns will also change.
“There is always a danger in these circumstances that investment in training can be a victim,” warned Mr Poulsson. “Now, perhaps as never before, companies must have an eye to the future and consider that significant growth in shipping could return within the next 5 years.  Employers must recognise that decisions made in these difficult times should not inhibit the future sustainability of the industry.  Investment in training and recruitment is an essential part of assuring good industrial health.
“We are experiencing a transition into a ‘smart’ era, which will feature integrated technology and automated functions and systems. Certainly, there will be a continuous challenge to ensure that seafarers’ skills reflect their changing roles on board ship,” he explained. “Seafarers may no longer be required so much to use machines but rather to collaborate with them.”
Esben Poulsson paid tribute to the contribution of seafarers who operate merchant ships, living and working away from home, contributing to economic development and the improvement of living standards worldwide.
As the amendments to ILO Maritime Labor Convention (MLC) that come into force in January approach, Mr Poulsson praised the MLC and its intention of ensuring worldwide protection of seafarers; establishing a level playing field for countries and shipowners committed to providing decent working and living conditions for seafarers; and protecting them from unfair competition from substandard ships.
He also spoke about the humanitarian tragedy being played out in the Mediterranean and the unprecedented numbers of migrants attempting the dangerous sea crossing to Europe in completely unsuitable craft. “Our lobbying efforts with European governments have seen a welcome increase in Search and Rescue resources such that the call on merchant ships to undertake harrowing rescues has been reduced, but not eliminated. However, until the United Nations takes a direct role in this situation it is difficult to see how the appalling death toll can be reduced,” he said.
On another front, he highlighted a recent piracy attack on a merchant ship off Somalia, the first for several years, and gave a warning that the threat has not been eradicated and that self-protective measures must be continued in order to avoid the terrible consequences should there be another hijack.
Mr Poulsson also highlighted the need for shipowners, maritime administrations and training providers to continue to work together to ensure full compliance with the new STCW training regime, that takes full effect in January 2017,  so as to prevent any disruption to the operation of the world fleet due to any lack of seafarers holding appropriate certification.
In conclusion, Mr Poulsson returned to the issue of future proofing training, warning: “Changes may well be rapid and a failure to respond with equal speed may leave training needs assessment trailing in their wake.”
Esben Poulsson • Europe • integrated technology
Email