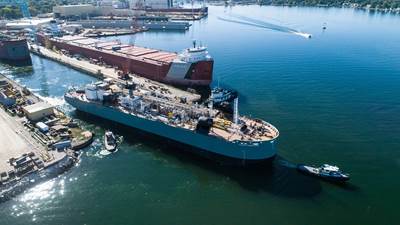 “The timing of one’s retirement is not an easy decision,” Thayse said. “Especially when you enjoy what you do and the people you get to work with every day.”

Thayse will remain at FBS through mid-January to help enable a smooth transition with the incoming VP and GM, Craig Perciavalle. After that, Thayse will have an advisory role within Fincantieri Marine Group, the corporate entity that oversees FBS.

Perciavalle comes to Fincantieri after most recently serving for years as the president of Austal USA in Mobile, Ala. Perciavalle has an extensive background in the shipbuilding and repair industry, having worked at several Gulf Coast shipyards throughout his career. He is a graduate of the U.S. Merchant Marine Academy at Kings Point, N.Y., with a Bachelor of Science Degree in Marine Engineering Systems. During his career, Perciavalle has held various senior management positions overseeing commercial and government new construction and repair programs of diverse vessel types.

“It’s never easy to replace a key leader, but we think with Craig coming onboard, FBS will continue to solidify its position as a leader in the commercial shipbuilding industry,” said Fincantieri Marine Group president and CEO Dario Deste.