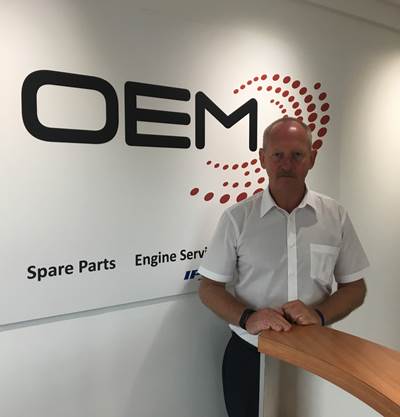 OEM Group said it has appointed industry veteran Malcolm Christie in a senior technical support role in response to growing its U.K. and international business.
Christie has more than four decades’ experience in the marine, and the oil and gas industries and joins OEM Group from 41 years at Turner Engine Powered Services where he latterly held the position of technical estimating manager for nine years.
Christie is a time served experienced engineer who started his career as an apprentice diesel engineer before going on to hold roles including service engineer, workshop foreman and technical engineer. He has also worked internationally on oil and gas projects in the Middle East, Asia, Far East and the U.S.
He has experience in leading a number of large-scale global projects which have harnessed tangible results including projects on drilling rigs which required the main engines and generators to be upgraded to increase power output, with no increase in footprint. This also included upgrading and replacing associated ancillary equipment. Christie successfully achieved this goal while increasing power by up to 50 percent for each marine package. These projects were completed on time and in accordance with Class rules and strict emission regulations.
Based at OEM Group’s Aberdeen headquarters, Christie will be responsible for all levels of the tendering process, providing technical assistance to OEM engineers and customers. He will also carry out cost analysis and technical quotations for large projects.
ancillary equipment • Far East • Middle East
Email