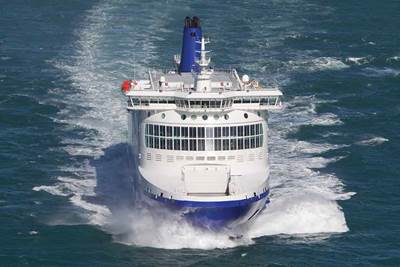 DFDS Seaways Calais-Dover ferry service, suspended by a workers' blockade of Calais port during the weekend, will resume on Tuesday morning, Transport Minister Alain Vidalies said after talks with the parties involved.
Ferry workers, industry executives, the Channel Tunnel operator Eurotunnel and the French government are due to reconvene later this week for further talks to settle the labour dispute after breaking up without agreement on Monday, Vidalies said in a statement.
"Discussions took place in a constructive atmosphere and have been suspended so that all the parties can consider the new proposals that came up," the statement said.
Eurotunnel's undersea rail-link services have also been disrupted by the dispute involving about 500 workers at ferry service MyferryLink.
The workers have blocked the port and sometimes the Channel Tunnel too in a protest over potential job cuts after Eurotunnel agreed to sell MyferryLink to Danish-owned DFDS .
The French government made proposals last week to end diffuse the dispute, including a call for Eurotunnel to establish a ferry charter contract that will save 150 jobs. DFDS will also hire 230 MyferryLink workers and the ministry said it would seek local employment options for remaining workers within three months.
(Reporting by Matthias Blamont; Writing by Andrew Callus; Editing by Leigh Thomas)
Channel Tunnel • Eurotunnel • French government
Email