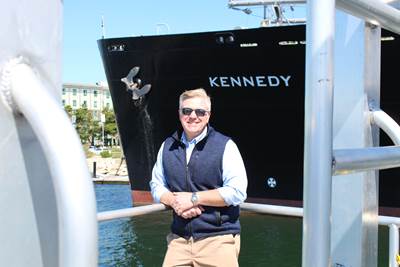 “Capt. Burns brings knowledge and experience in the field of renewable energy to this extremely important role,” said Rear Admiral Francis X. McDonald, USMS, President of the Massachusetts Maritime Academy. “We are extremely fortunate to have a leader and innovator at the Academy and are proud to promote one of our own to this position. I look forward to seeing the MCRE develop under his leadership.”

The offshore wind industry will be a key focus for Capt. Burns in this role. The United States Department of Energy estimates 43,000 new jobs will be created in the offshore wind market by 2030, and a Massachusetts Clean Energy Center study estimates that over the next decade, offshore wind farms will create 2,000-3,000 jobs and generate economic impacts between $1 billion-$2 billion in the region.

“This is such an exciting time,” said Capt. Burns. “Offshore wind is basically a new industry in the U.S. and it’s creating so many opportunities for our cadets and alumni as well as the entire region.”

Prior to his appointment to Executive Director of the MCRE, Capt. Burns was the Director of MMA’s Center for Maritime and Professional Training. In that role he was responsible for the day-to-day administration and operation of MMA’s professional training division, which provides a variety of non-credit, professional development courses to approximately 700 students per year. During his tenure, he developed a comprehensive safety training program for the offshore wind industry.

“MMA has been training people to work at sea for 130 years,” Capt. Burns said. “We’re excited to apply our experience to the offshore wind industry as it develops in the U.S. and to support the Commonwealth’s commitment to renewable energy.”

Living in Plymouth, Mass., with his family, Capt. Burns holds two degrees from Massachusetts Maritime Academy. In 1992 he received a Bachelor of Science degree in marine transportation and in 2018 he earned a Master of Science degree in emergency management. He holds a USCG Master's License of Unlimited Tonnage with over 14 years’ experience on government owned, contractor operated vessels. Capt. Burns is an officer in the USNR's Strategic Sealift Officer Force, an Associate Fellow of the Nautical Institute as well as a member and trustee of the Boston Marine Society.

As he takes on this role, Capt. Burns said, “I look forward to working with the Academy’s leaders, our growing number of industry partners, the cadets, and the entire MMA family to further establish the Academy as a leader in offshore renewable energy training.”