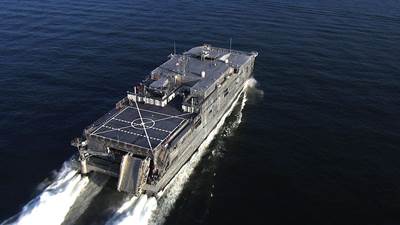 The West Australian reported that Austal halted its shares from trading, and reportedly is in the process of reviewing its U.S. operation, Austal USA. Austal USA is best known for it construction of vessels for the U.S. Navy, and late last year the parent company’s price took a hit amidst reports of difficulties with the Littoral Combat Ship program.
As recently as two days ago (June 28, 2016), a ceremony was hosted at the U.S. facility in Mobile, Alabama to celebrate the keel authentication of the U.S. Navy's future USS Charleston (LCS 18), the ninth Independence variant littoral combat ship.
LCS is a modular, reconfigurable ship, with three types of mission packages including surface warfare, mine countermeasures and antisubmarine warfare. The LCS class consists of the Freedom variant and Independence variant, designed and built by two industry teams. The Freedom variant team is led by Lockheed Martin – for LCS 1 and follow-on odd-numbered hulls. The Independence variant team is led by Austal USA – for LCS 6 and follow-on even-numbered hulls.
According to The West Australian, the company is intending to update the market on Monday.
Lockheed Martin • the West Australian • United States
Email