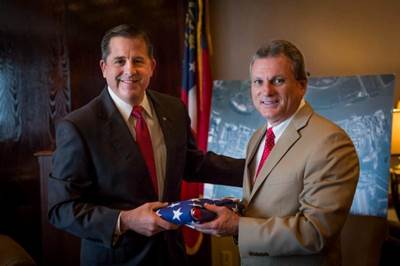 Congressman Buddy Carter presents outgoing GPA Executive Director Curtis Foltz (left) with a U.S. flag that has flown over the capitol in Washington D.C. Carter recognized Foltz' service to the state of Georgia during his final board meeting before stepping down June 30. (Photo: Georgia Ports Authority)

The Board of Directors of the Georgia Ports Authority has elected James L. Allgood as chairman.
"With more than 40 years experience as a business leader, Jimmy Allgood provides the insight and leadership skills necessary to continue GPA's progress toward a prosperous future," said outgoing Chairman James Walters.
Allgood, who served as vice chairman for two years, will assume his new responsibilities July 1.
“With our harbor deepening under way, the infrastructure investments we're making on terminal, and the improvements to road and rail connections we're building in Georgia, there is a wealth of opportunity ahead of us,” Allgood said.
Also at the board meeting, the authority approved its fiscal year 2017 budget, including $116 million for capital infrastructure improvements. The funds will cover 15 projects, including $42.4 million for the purchase of new ship-to-shore and rubber tired gantry cranes. The remaining funds will go to upgrade existing assets, property development and other infrastructure.
Currently featuring 22 ship-to-shore cranes, Savannah's Garden City Terminal will add four cranes this year, with another set of four slated to arrive in the late spring of 2018, bringing the total number to 30 cranes.
The board also announced that in consultation with Governor Nathan Deal and the Office of Planning and Budget, it is committed to fully funding its three-year, $7.5 million commitment to the Jasper Ocean Terminal Joint Project Office (JPO). The funds will cover Georgia's share of the JPO operating costs, as well as the services of a third-party contractor hired to prepare an environmental impact statement for the Jasper Ocean Terminal.
“The announcement today to fund three consecutive years of JPO expenses shows Georgia's commitment to bringing this project forward as soon as possible,” Allgood said. “For the South Carolina communities adjacent to the Jasper Ocean Terminal, its development will have a massive positive impact. It has the potential to create thousands of jobs, bring in millions in tax revenue for local governments, and ensure the region's future capacity for decades to come.”
As planned, the new terminal will feature 10 berths (phased in to meet rising demand), a turning basin, road and rail access corridors, and supporting infrastructure on 1,500 acres in Jasper County, S.C. This new investment will increase the region's capacity by 7 million twenty-foot equivalent container units.
In other business, Executive Director Curtis Foltz reported to the board that container volumes dropped by 11.3 percent for the month of April, which saw a total of 298,040 TEUs. For the first 10 months of the fiscal year, beginning July 1, GPA has moved a total of 3 million TEUs, an increase of 0.3 percent compared to the same period last year.
“Although container volumes were down in April, the monthly and more importantly year-to-date numbers – primarily driven by increased import market share - continue to exceed our forecast,” Foltz said. “We anticipate similar year-on-year monthly variances through July due to prior year artificially inflated volumes.”
In his report to the board, Foltz noted that Savannah's April 2016 performance constituted an 11.6 percent increase over the volume of 266,930 TEUs marked in April 2014 - the year before cargo diversions related to West Coast labor issues.
Curtis Foltz • Georgia • Georgia Ports Authority
Email