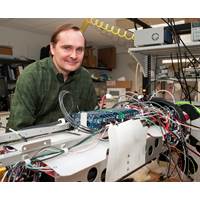 The Woods Hole Oceanographic Institution (WHOI) has appointed James Bellingham as the first director of its Center for Marine Robotics. Bellingham will come to WHOI in early fall 2014 from the Monterey Bay Aquarium Research Institute (MBARI), where he was director of engineering and most recently chief technologist. Bellingham earned his PhD from Massachusetts Institute of Technology, where he was founder and manager of the Autonomous Underwater Vehicle Laboratory.  He was also co-founder of Bluefin Robotics in 1997, a Massachusetts-based company that develops, builds and operates autonomous