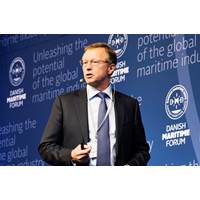 logistics and shipping industry after stepping down from his position as Group Chief Executive Officer of A.P. Moller - Maersk A/S in 2016. Andersen, who is a board member and strategic adviser to Unifeeder’s largest investor, e.g. Nordic Capital Funds, also serves as Non-Executive Director at BP plc, Non-Executive Director at Unilever as well as Chairman of the Board of international retail group, Dansk Supermarked A/S. “Unifeeder is a well-run company, fulfilling an important role as partner to both global liner shipping companies and industrial customers across Europe,” Andersen

Carlos Echeverry. Echeverry, who has headed the company since March 2015, through difficult times caused by the global fall in crude prices, has resigned for family reasons, Ecopetrol said in a statement to the Andean country's financial regulator. Bayon, an engineer who spent 20 years working at BP PLC, will take over from Sept. 15, the company said. He has been a vice president at Ecopetrol since February 2016. Echeverry told Reuters in an interview last week that the company will focus on exploring for unconventional deposits in the center and north of the country over the next few years in

to cut around 100 offshore jobs and up to 100 more onshore could be affected, a company spokesman said. The company, which employs 20,000 people, did not specify the location of the job cuts.   A day earlier, smaller peer John Wood Group Plc, the Aberdeen-based company whose customers include BP Plc, said it was in consultation with 380 PSN unit employees, or about a fifth of its onshore UK workforce for the unit, and that 80 jobs could be lost.   Britain's North Sea is one of the most expensive exploration areas in the world and has seen oil majors cut hundreds of jobs. The region employs

billion charge related to jobs cuts and the writedown of some seismic vessels. "They did say they would be cutting jobs, but the magnitude of them is definitely a shocker," Philip Van Deusen, an analyst with Tigress Financial Partners LLC, told Reuters. A slew of global oil majors such as BP Plc and ConocoPhillips have cut jobs due to a nearly 60 percent slump in oil prices over the past six months. Brent crude closed at $47.67 on Thursday. "If oil prices stay at this level, none of these companies would just be able to adjust with one round of workforce reductions," Robin Shoemaker